Moving Guru » Moving Guide » What Is a Military Move?

What Is a Military Move? 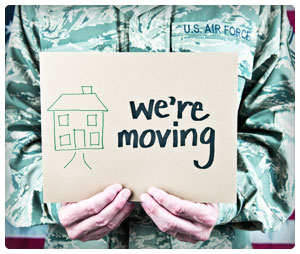 Transferred to a new base?

Military service members, whether in the Marines, Army, Air Force or Navy, all deal with the same common issue: moving.

Service men and women are transferred to a new base roughly once every three years, though it happens even more frequently for some.  This requires up and moving to a new location, often on the military’s tight schedule.  It’s difficult and pressuring.

Fortunately, once you understand how military moves work, you’ll be able to take advantage of some of their perks and avoid their common pitfalls.

That’s right. The military will pay for your move, and they’ll do all the hard work for you, including hiring the moving company and transporting your stuff.  The amount they’ll pays is called the Government Constructive Cost (GCC), which is based on the weight of your possessions and the size of your family.

You can decide to move your stuff on your own as well.  In such a case, you deal with the logistics, the people and the details of your move.  The military will pay you 95% of the GCC to make that move, which you can then use to hire a moving company, buy moving boxes, etc.

While it might seem like the do-it-yourself (DIY) military move is unnecessary, there are actually a lot of positives to it.  Read this article to learn why you should DIY rather than let the government handle your move.

Military moves differ from other moves in one major respect: there’s often a gap between moving and finding a permanent home.  This requires members to live in temporary on-base or off-base housing.

When there is no on-base temporary lodging, military members need to live out of motels, hotels and other private locations.  The military will pay for 10 days of off-base lodging at $180 a night.

Some servicemembers can find permanent housing on base.  This housing ranges from not-so-nice to quite nice, appropriate for any family.  However, it generally comes with restrictions, and members have complained in the past about difficulties moving out.

If on-base housing is full, members will have to look elsewhere, usually in rentals in the neighborhoods surrounding the base.  Members might want to live off base for a number of reasons, including:

That’s the gist of the military move, but it gets a lot more complicated.  Learn about how you can profit from your military move.