Moving Guru » Moving Guide » How to Move a Keg of Beer

How to Move a Keg of Beer 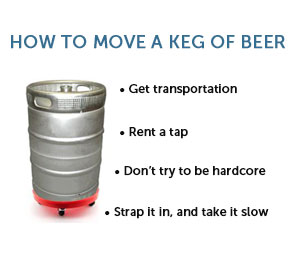 Need to get a keg from point A to point Party?

Listen, Broseph, a whole night’s worth of drinking, dancing and poor decisions rides on you moving that $70 keg of Keystone Ice the right way. If you mess it up, you’re going to have a foamy, dysfunctional mess. Here’s how to avoid committing such an uber party foul:

You need some type of vehicle to transport a keg. If you’re buying a keg, then I hope there is someone with a car who plans on drinking from its golden guts. Ask them to lend their car to the cause. If they refuse, threaten to bar them from the party.

Once you have a car, make sure you have space to put the keg. One open car seat will cut it.

Rent a Tap.  Seriously, Just Do It

Yeah, I know, your cousin lent you his tap and he swore by Coors that it flows like a waterfall.  I don’t care.  Rent a tap.

Without a tap, you don’t have beer.  And, unfortunately, taps fail all the time.  Perhaps it’s the type of keg, the age of the tap, the poor quality suds… I don’t know, but I’ve seen many hosts hunched over a broken tap while the party waited impatiently in line.

Avoid this humiliation by renting a second tap.  Having it on hand might save your party.  Not that your cousin’s tap isn’t legit…

Don’t Try to Be Hardcore

The beer store guy is going to place the keg in front of you, and at that moment you might remember that work out from two weeks ago.  You might feel the Herculean juices of a man about to throw a rager surging through you.  You might believe you can lift that thing.

For the love of everything suddy, don’t.  Wait for your buddy, and carry the keg outside together like a couple pansies. It’s better then you lifting then dropping the keg and turning it into a big metal ball of agitated carbonation.

Strap It In, And Take It Slow

Don’t just toss your keg in the car or truck and leave it fallible to physics. If that thing is bouncing around a truck bed like a pinball, it’s going to spray beer fizz all over the place when you try to tap it.  And then the first forty beers are going to be 95% foam, and you’re going to be storing beer fizz in pitchers waiting for it to reduce into a something borderline drinkable.

Treat your keg like a kid.  Buckle it into a seat, if possible.  If not, put it next to someone who can hold onto it.  If not that, then try to at least wedge it into a spot so it doesn’t roll around.

Then take your drive slow.  Try to see if you can accelerate to 40 mph at a consistent rate over 15 seconds.  Take sharp turns like grandma.  Brake before your start braking.

If you’re having a real party, then you’re probably going to be moving liquor bottles, too.