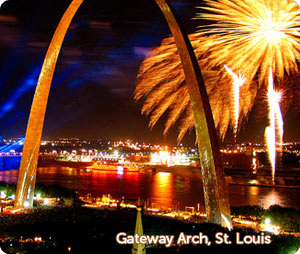 St. Louis is commonly called the Gateway to the West, because of the pivotal role it played in our nation’s westward expansion.  Today the Gateway Arch symbolizes America’s shift from east to west, as does the Mississippi river, which rushes past St. Louis’ city edge.

St. Louis is more than a mere landmark, though.  It is a vibrant city known for its blues and jazz, its parks and its sports.  It is also home to a strong base of the manufacturing and logistics industries.

Scroll down to learn about the pros and cons of St. Louis…

St. Louis is located on the western side of the Mississippi River.  On the other side is Illinois, which makes up part of the greater metropolitan area that is home to 2.8 million people.

St. Louis is in the middle of a flat plain, with no nearby mountains or large bodies of water.  Temperatures swing drastically from well-below freezing in the winter to humid and hot in the summer.  St. Louis is also prone to tornadoes and severe thunderstorms.

Reasons to Move to St. Louis