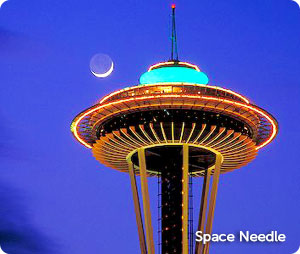 Seattle, named the Emerald City for the large, evergreen forests that surround it, is the Northwest’s crown jewel.  Amongst its forests are bright blue channels of sea and spanning bridges.

Beyond its natural beauty, Seattle is a massive center for industry, home to one of the nation’s busiest ports and a number of technology stalwarts.  It has also proven vital to American culture as the birthplace to grunge music, numerous jazz artists, and numerous coffee businesses.

Scroll down to learn about the pros and cons of Seattle…

Seattle is located on the Puget Sound, which is connected to the Pacific Ocean and which splinters off into a number of narrows throughout the geographic area.  On the other side of Seattle is Lake Washington.  In the larger surrounding areas, numerous snow-peaked mountains can be seen, including Mount Rainier and Mount Olympus.

Seattle is part of a larger metropolitan area that includes the nearby cities of Tacoma and Bellevue.  The metro is home to roughly 3.3 million people.

Why to Move to Seattle

Why NOT to Move to Seattle

Thinking about moving to Seattle? Then check out some Seattle moving companies, which you can do right here: Seattle movers.