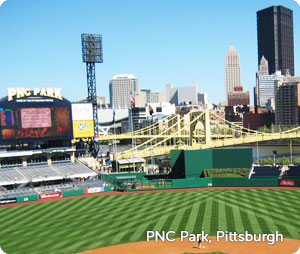 Steel City was born on the back of the metal industry, which helped build America throughout the late 1800’s and early-to-mid 1900’s, leading to Pittsburgh’s role as a major American metropolis.  Though the need for steel has tapered some in recent decades, Pittsburgh’s economic growth has continued, making it one of America’s most financially secure cities.

An impressive and vibrant culture has followed.  Pittsburgh offers its residents a burgeoning music scene, fine dining, and a feverish football team (aptly named the Steelers), in addition to other amenities.

Scroll down to learn about the pros and cons of Pittsburgh…

Pittsburgh is located in eastern Pennsylvania at the intersection of two major rivers, the Monogahela and the Allegheny, which form the Ohio River.  The area is very hilly, and most of Pittsburgh’s neighborhoods include stairs.

The Pittsburgh metropolitan area includes the cities of Brentwood, Baldwin and Franklin Park, and it is home to 2.44 million people.

Positives of Living in Pittsburgh

Negatives of Living in Pittsburgh