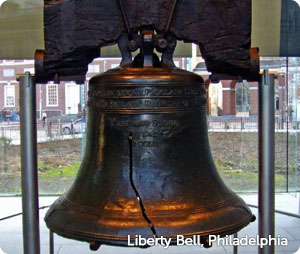 Philadelphia has spawned many great innovations and historical moments since it was founded in 1682. At one point, it was even designated the nation’s capital. Philadelphia’s population skyrocketed during the nineteenth century due to a huge influx of European immigrants and African Americans, and these varying cultures are still well represented in the “City of Brotherly Love”.

Nowadays, Philadelphia remains one of the most illustrious cities in the US.  Aside from its historical importance, which attracts a regular stream of tourists, it’s a center for the arts, financial activities and media, and it continues to provide intellectual innovation.

Philadelphia is located on a flat plain, and two major rivers, the Delaware and Schuylkill, run through it.  The city is on the far eastern edge of Pennsylvania, only about an hour from the Atlantic Ocean, though New Jersey separates the two.

Philadelphia is comprised of a few dozen neighborhoods, the most famous of which include University City (home to the University of Pennsylvania), South Philadelphia (with its great Italian culture), Society Hill (for the ritzy), and Old City (where the nightlife hides).

Philadelphia is part of a larger metropolitan area that includes the large cities of Camden and Wilmington and is home to over 6.5 million people.  It is about an hour southwest of the New York metro area.

Positives of Moving to Philadelphia

History – Back in the day, Philadelphia pioneered the first U.S. cancer hospital, medical school, pharmacy school, art museum, botanical garden, post office, public library, stock exchange… and more. It has iconic landmarks, too.  Tourists love to visit the Liberty Bell, which came to represent American independence after it was rung to celebrate the reading of the Declaration of Independence.

Education – Much of our educational system started in Philadelphia, and today there are over eighty colleges, universities, and specialty schools in the area.  Keep your eyes open for top twenty educational institutions like the Ivy League University of Pennsylvania as well as superstar liberal arts colleges, like Haverford and Swarthmore.

Food – Philadelphia is the birthplace of several staples of the American diet, including the hoagie, cheesesteak, and the soft pretzel. Root beer was invented here.  A lot of its food can be attributed to the diverse cultures of people who migrated to Philadelphia in the nineteenth century, though by no means has Philadelphia’s food stopped evolving.

Public Transit – Philadelphia has an extensive public transit system that relies on buses, trains, and trolleys.  Over a quarter of its population uses public transit.

Rents – For a large, condensed city, rent in Philadelphia is relatively affordable, especially when compared to Chicago, New York City and San Francisco. It’s definitely a place to consider if you want to live in a large, bustling city on the cheap.

Negatives of Moving to Philadelphia

Weather – Philadelphia is cold and snowy in the wintertime, but once summer rolls around, it becomes very hot and humid, sometimes unbearably so. The seasons to look forward to are fall and spring, because summer and winter are predictably bad at best.

Traffic – If driving, you’ll probably have to contend with heavy traffic during rush hour. The best thing to do to improve that is to plan your routes once you become more familiar with them. Avoid certain parts of I-95 between the Bridge Street and Academy Road exits, for example.

Crime – Philadelphia has cut down considerably on crime in recent years, but some neighborhoods are still dangerous.  Anyone moving to Philadelphia should consider taking a look at the crime maps for different neighborhoods.