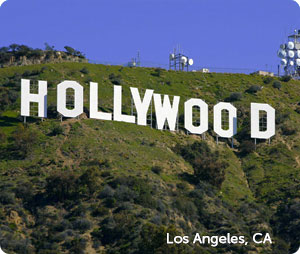 Los Angeles, or simply L.A., is a city of glamour and sunshine, with sun-drenched beaches, celebrity spottings, and famous resorts.  However, it’s also a major U.S. port, business hub and supporter of the arts, a place where aspiring entrepreneurs and artists can find their footing.  In this regard, it truly is the City of Angels.

Los Angeles is known for being the world’s capital of entertainment, home to Hollywood and the movie industry. With nearby universities such as UCLA and USC, it’s also an intellectual center. Finally, it’s as culturally diverse a city as they come, with large Asian and Latino populations.

Los Angeles is located on the Pacific Ocean in southwest California. It is built on a flat terrain called the Los Angeles Basin.  Around it are a number of mountain ranges, including the Santa Monica’s, the Santa Ana’s and the San Joaquin Hills.  The climate is arid, but the land supports a great variety of lush vegetation.

Los Angeles is part of the second-largest metropolitan area in the United States (behind only New York), home to nearly 13 million people.  It includes the local cities of Long Beach, Pasadena and Santa Ana, and the more-distant cities of Anaheim, Riverside and San Bernadino, all of which span outwards from Los Angeles.

Positives of Moving to L.A.:

Weather – L.A. is known for its great climate. It’s a sunny, warm place.  Its summers aren’t too hot (though they do push 90), because the Pacific keeps the area temperate; there’s no humidity; and its winters rarely dip below 45 degrees at night.

Arts/Music/Food – L.A. is an art, fashion and music mecca. In LA, it is important to stay on top of the trends and to have your own style. With ethnic influences from the Asian and Mexican populations, and several premiere chefs, the food in Los Angeles is known for being incredible. A number of famous food chains also started in this city, including In-N-Out Burger.

Hollywood – For aspiring actors and others involved in the motion picture industry (cameramen, screenwriters, directors), Los Angeles offers unparalleled opportunity. The movie industry was born here, and it remains.  Hollywood, a district of downtown Los Angeles, is recognized as the center of the film industry. Also, many entertainment outlets, including Entertainment Weekly, Variety magazine, and various news stations, are located in Los Angeles in order to get the best information on upcoming projects.

From Skiing to Beaches – Los Angeles is one of the few places where you can ski in the mountains and sunbathe at the beach in the same day. Less than a hour outside of the city, you can ski or snowboard to your heart’s content. The season usually runs from November until the end of March. And, of course, you also have beautiful Southern California beaches to choose from in Los Angeles, including Abalone Cove, Malibu Lagoon, and Venice Beach, where the beachfront walks get crowded every sunny afternoon with an eclectic stream of bicyclists, runners, and roller-bladers.

Education – Los Angeles is a very educated city. UCLA has an amazing array of educational opportunities, as does USC. The liberal arts colleges in the area, such as Occidental and Pomona, are just as stellar. For these reasons, the public and private school systems of Los Angeles are very competitive.

Negatives of Moving to L.A.

Trnsportation – L.A. probably has the worst traffic in the nation, and that’s saying a lot.  The city has a limited subway that has not yet been completed—for now, buses service areas that the underground subways can’t reach.  Many people choose to drive instead, contributing to the notoriously bad L.A. traffic.  In L.A., even ten-lane highways get choked during the daily commute.  And, unfortunately, walking often isn’t an option, because the city suffers from severe urban sprawl.

Smog City – L.A. is infamous for its smog.  The metropolis is located in a valley that traps car exhaust and other gasses, creating heavy ozone, or smog.  On the worst days, a brown haze hangs over the city, dulling its sunny skies.

Cost of Living – A lot of people want to live in Los Angeles, and the cost of living reflects the demand. Living space is difficult to come by, and rents are high.  Making matters worse, the sales tax in Los Angeles is 8.75%, which is a bit higher that many other places in already-expensive California. It can make a difference on large purchases, like cars and homes.

Earthquakes – Los Angeles is located in a seismically active area that often gets earthquakes. The tail end of the San Andreas Fault reaches Los Angeles, and there have been many recent small earthquakes linked to it.

Want to move to LA? Talk to some Los Angeles moving companies, then. You can find them for free right here: LA movers.