Moving to Indianapolis, IN 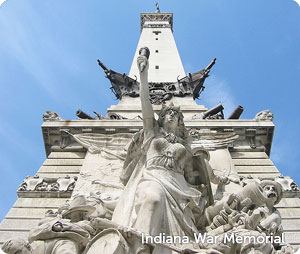 Indy, they call it, and appropriately so.  Indianapolis isn’t just a city in Indiana; it’s the everything of Indiana.  It’s the capital, the commercial center, the largest city (by far), and the cultural landmark of Indiana.  There’s no reason to call it anything else.  It is Indiana.  It’s Indy.

Indianapolis enjoys a lively downtown, which is a major draw for sporting events and business conventions, adding to an already-strong economy.  Slowly but surely, it is becoming one of the most influential cities in the American Midwest, entering into the conversation with its major neighbor to the northwest, Chicago.

Indianapolis is located in the middle of Indiana.  It rests on flat land, which is covered in forests and prairies.  Two significant waterways flow through the city: the White River and Fall Creek.  However, the city is not located on or near a major waterway or lake, unlike many other Midwestern cities.

Indianapolis is the heart of the greater metropolitan area, which includes the large, nearby cities of Carmel and Greenwood.  The metro is home to 1.75 million people, and it is quickly growing.

Positives of Moving to Indianapolis

Sports – Indianapolis is known as the best city for amateur sports, because it hosts a number of events at the college and high school levels.  It hosts professional events, too, notably in racing: the Indianapolis 500 and the Brickhouse 400.  Both draw major crowds to the city.  It is also home to the Colts (NFL) and Pacers (NBA).

Downtown – Indy’s suburbs offer some of the cheapest housing in the nation, but it’s its downtown that make living in Indy worthwhile.  The city made a conscious effort to revitalize its downtown in the 1980’s, and dozens of venues, skyscrapers, and attractions later, they appear to have succeeded.  The downtown offers pretty walks (like along the canal), hip restaurants, and lively crowds.

Government – Indianapolis is home to the state government, and, really, the entire state is run out of the city – Indiana doesn’t have any other cities that stack up to Indy’s size.  So, for the political-minded Indianan, Indy is the place to be.  The local government offices also provides a large chunk of the population with work.

Monuments & Buildings – Indianapolis is home to dozens of beautiful monuments, many of them commemorating wars and tragic moments in American history.

Negatives of Moving to Indianapolis

Weather – Like all Midwest cities, Indiana gets bad weather.  Yeah, fall is nice, and some days in spring are serviceable, but residents can really only bank on the following: hot, humid summers, rainy/snowy springs, and freezing cold winters.

Transportation – Indianapolis doesn’t have a light rail system for commuters… yet.  One is supposedly in the works.  Until then, for most residents commuting means long bus rides or traffic.  Neither are very good options.

Bland – Indianapolis has lots to do, but there’s no escaping that it’s located on a rather flat piece of land nowhere near anywhere particularly beautiful.  Additionally, though it does attract business conferences, Indianapolis isn’t known as a big stop for musicians and entertainers, especially those who aren’t massively popular.  Finally, the city doesn’t have a true calling card, like barbeque in Kansas City, surfing in San Diego, liberal living in Portland, or amusement parks in Orlando.