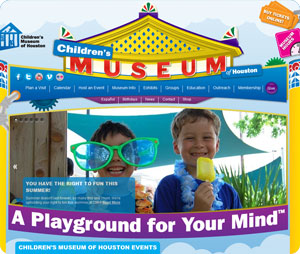 Houston may have started as a down-to-earth Texas town, but it has become Space City, the bustling, high-tech home to the energy industry and N.A.S.A. It is a modern metropolis now, complete with a thriving economy and a unique array of arts and entertainment.

People from all over the world live in Houston, bringing numerous cultural perspectives and cuisines to the city.  And Houston’s diverse museums and educational opportunities, such as Rice University and the University of Houston, keep all of its residents reaching for the stars.

Houston is located near the Gulf of Mexico, though the island city of Galveston actually fronts the coast, not Houston – Houston’s port is connected to the Gulf by a large channel.  The city is built on what was originally swampland and forest.  There are a few lakes in the area, the largest of which is Lake Houston, just northeast of the city.

Houston and its surrounding cities make up the fifth-largest metropolitan area in the nation.  Sugar Land (to the southwest), Baytown (to the east) and Galveston are the largest nearby cities.

Texas – Houston is the biggest metropolis in Texas, and although it might not be as “Texas-y” as Austin or Dallas, it still pays homage to Texan traditions, such as the rodeo and barbeque.

International Business – Houston is an international hub for imports and innovation, most notably in the energy, oil, and gas industries. The Port of Houston ranks first in the U.S. for the amount of international goods handled over the water.

Museum / Theater Districts – Houston is very dynamic and multicultural. There are many must-see locales in the museum and theater districts. The nineteen museums in downtown Houston attract over seven million people a year.

NASA (National Air & Space Association) – The Lyndon B. Johnson Space center, tasked with being the headquarters of NASA’s training, research, and flight control, is located in Houston (it was the target of Tom Hanks’ popular catchphrase from Apollo 13 — “Houston, we have a problem.”). The center opened in 1963 thanks to land donated by Rice University.

Bicycling – Houston has the largest number of bike commuters in Texas thanks to over 160 miles of constructed bike lanes. It’s currently in the process of creating even more. Bike events, such as Critical Mass, the bike parade, pass through Houston and get great attendance.

Negatives of Moving to Houston:

Weather – Houston is extremely humid in the summertime, and its temperatures can reach 100 regularly. When you’re out and about in Houston during the summertime, it is important to have sunscreen on hand… and bug spray… the mosquitos are like bears there.

Traffic – Houston has a light rail system, but most of its population depends on driving, leading to heavy highway congestion. Before you move here and start regularly commuting to work, familiarize yourself with high occupancy vehicle (HOV) lanes. They are lanes reserved for carpoolers that are physically separated from other, more-congested lanes.

Hurricanes – It seems as if every region of the U.S. has its own natural disaster to worry about, and Houston is no exception. It gets hurricanes. Never fear, though! Prepare for hurricanes by first understanding what they are, then crafting an emergency supply kit to sustain your family for up to several weeks.

Air quality – The American Lung Associate rates Houston as having the eighth worst ozone level in the country. Although this isn’t something you will be able to directly prevent or protect yourself against, do your part by cutting down on unnecessary car trips and using the above-mentioned HOV lane for carpooling!