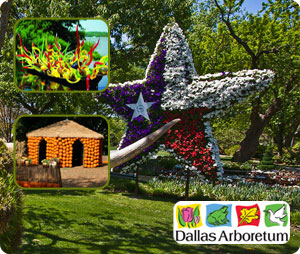 People call it the Big D for a reason—Dallas is the heart and soul of Texas, a big state with a big attitude.  It exudes everything Texan, taking pride in the state’s laid-back, country ideals and hardened history.

However, as Texan as Dallas might be, it’s also a metropolitan city with something to offer all of its residents, even those who don’t like wearing cowboy boots.  Dallas and nearby Fort Worth are home to a slew of major international business, like AT&T and American Airlines,  a vibrant entertainment scene, and a fast-paced, big-city lifestyle.

Dallas is the nation’s largest landlocked city.  It is located in the middle of a large, flat plain in north Texas.  The city was originally founded at the White Rock Crossing, a popular place for wagon trains to cross the Trinity River.  Today the river still runs through the center of the city.

Dallas is part of a larger metropolis that includes the sizable cities of Fort Worth, Arlington, Irving, Plano and Garland.  The area is home to over 6.5 million people.  Much of the metropolitan area falls within Dallas County.

Positive of Moving to Dallas

Texan Pride – Dallas is arguably the heart of Texas.  This means plenty of good things, including barbequed brisket, chili, cowboy boots, rodeos and hot weather.  If moving to Texas, make sure to indulge in what the great state has to offer.

Texas State Fair – Dallas is home to the annual Texas State Fair, which is a celebration of everything “Texas”—amusement park rides, face painting tents, fried foods, and more. Some highlights that are worth checking out include fried butter, fried cookie dough, fried pumpkin pie, fried Snickers, and of course the corndog, which was first invented here… and is fried.

Sports – Dallas has teams in all four major professional sports, including the iconic Cowboys (NFL) and Rangers (MLB) franchises, and state-of-the-art stadiums to house them. If you’re a big sports fan, you’ll have a lot to do in Dallas. Fans are invested in their favorite teams, and the spirit of this city during major games is nothing short of amazing.

Opportunity – Dallas and its surrounding metropolitan area, including Fort Worth, offers affordable rents, room to expand, and plenty of job opportunities.  Already home to one quarter of all of Texas’ residents, the Dallas-Fort Worth area’s population continues to grow, while its unemployment rate remains below the nation’s average.

Negatives of Moving to Dallas

Weather – Winters in Dallas can occasionally bring cold and ice. However, that’s not the season to watch out for! People complain about Dallas summers the most. The days can get extremely hot and humid. That being said, Dallas has a slightly lower humidity index than other Texas cities, like Houston.

Traffic – Dallas is depends on its highways, and it doesn’t offer many other options. Traffic is very heavy during rush hour, so consider finding a carpool at work in order to take advantage of those HOV lanes.

Tornadoes – Dallas is in the middle of what is called Tornado Alley. In fact, Texas as a whole is known for its numerous tornados, which can be attributed to the mixture of cool, dry air and warm, moist air from neighboring regions.

Landlocked – Dallas is a landlocked city, situated on the lonely Western plains.  Making matters worse, unlike other landlocked cities, like Phoenix and Sacramento, it’s four hours from the nearest coast (the Gulf of Mexico) and even more to the nearest meaningful mountain range.  Get ready to get used to flat.