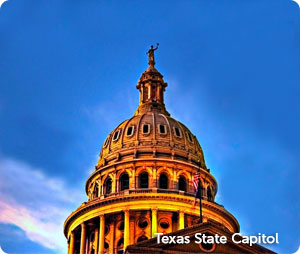 Austin isn’t the biggest city in Texas. Aww, heck, it’s not even the third biggest city.  However, it’s very much the heart of the state.  It’s home to the University of Texas, it’s iconic for its food, culture and innovation, and it’s the state capital.

Austin is also a known as the Live Music Capital of the World.  The city bounces with music of all forms in countless venues, both big and small.  People from all across the world visit Austin to partake in the epic music festivals, Austin City Limits and South by Southwest.

Austin is located in central Texas, in a region characterized by the rolling hills of Texas Hill Country.  Vegetation is relatively short, woody and spikey, as often seen in arid areas.  Texas’ Colorado River runs through the city on its way to the Gulf of Mexico, and there are a number of artificial lakes in the region.

Austin is the seat of its own metropolitan area, which includes the nearby cities of Round Rock and San Marcos.  It is home to 1.8 million people.  Austin is also about an hour-and-a-half drive from San Antonio, another large Texas metro.

Positives of Moving to Austin

Music – Austin has a lot to offer, as we will discuss below.  But any conversation starts with music.  The city’s downtown is a grid of streets lined in bars, clubs and music venues.  On any given weekend (or Tuesday), there will be someone in town, and not just the big names – residents with the most eclectic tastes can expect their favorite artists to stop in.  Then there’s South by Southwest, an annual, week-long festival that lines just about every one of these venues with acts, and Austin City Limits, a music festival at a large park in the city.

Education –  Austin is home to the University of Texas, Texas’ biggest university, which is widely recognized as one of the best in the nation.  Austin is also served buy an extensive and well-recognized public school system.

Politics – Austin is home to Texas politics, one of the most influential political systems in the US.  What happens in Texas has large effect on the nation.  So, those who are inspired by democratic discourse will find the city intriguing at the least.

Restaurants – For every awesome bar and club in Austin, there is an awesome restaurant to match.  While you can find any cuisine in Austin, definitely try the BBQ, crawfish boils and anything with some hot hot sauce to spice up those hot Texan afternoons.

Negatives of Moving to Austin

Weather – With Texas comes heat.  And not your “ah it’s a bit humid and sunny” today heat.  Nah, this is real heat.  Heat that makes your sweat sweat.  Be ready for high 90’s and dense humidity for weeks on end.

Traffic – Austin is a good biking city, but it doesn’t have a public transportation system capable of relieving the stress on its roadways.  Currently, the state is planning a railway from Austin to nearby San Antonio, which might help some.

Job Market – Austin has a strong economy.  However, it’s hard to break into for newcomers.  The city is relatively small when compared to other major cities, limiting its opportunities.  It’s also a very popular place to live, creating high job competition.  Making matters worse, the University of Texas is churns out over 10,000 graduates each year, who often have an inside track to local jobs.

Want to move to Austin? It’s time to talk to some Austin moving companies. Find them here: Austin movers.